Our efforts in Turkey have found success in securing release of Comrade Perinçek yesterday March 10th, who suffered six years in Turkish prison.

The Chairman of the Workers’ Party (Turkey), Doğu Perinçek and some other patriots, imprisoned in the scope of the Ergenekon trial were released on Monday, 10 March.

Doğu Perinçek, the Chairman of the Workers’ Party, immediately addressed in a speech the thousands that had gathered outside of Silivri prison waiting for him. We hereby publish the entire text of this speech:

“I salute our great People with love and utmost respect!

It is clear that they have imprisoned us to divide Turkey. Now as we break our chains we shall unite our country! They have tried to turn Turkey into a dictatorship of religious sects, shaikhs, and devotees. We shall root out these traitors!

I would like to thank all my comrades who came here to batter the barricades on every occasion, as they are the ones who forced the corrupt administration to set us free! We are like an unsheathed sword, ready to strike! We are ready to realize our goals! 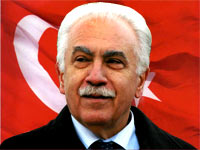 First of all, we shall unite our country!

Secondly, we shall prevent those criminals from destroying the Republic!

In order to achieve their treacherous goals, they targeted two organizations: the Turkish Armed Forces and the Workers’ Party. And here we stand in front of you as veterans! We are the veterans of the war they have waged against the Republic!

Those who imprisoned us are now weak and feeble! The time is ripe to eliminate these usurpers! I hereby declare before you: We shall forge the People’s Government by uniting our Nation! We shall judge Erdoğan, Gül, Gülen and their partners in crime!

Our beloved Turkey will walk towards a brighter future. I repeat, the time is ripe: Atlantic imperialism has failed in Syria and Iraq. Iran continues to stand strong. The situation in Ukraine is not in their favor. They are going down and they will drag their puppets to their downfall!

Under such circumstances, those who seek to divide our Nation by inciting racial hatred and demanding ethnic borders are bound to fail. We shall allow no harm to befall our beloved Homeland!

The conditions are perfect. Do you remember the time when they put us behind bars? Turkey was headed towards a fundamentalist society. Now that we are free, we shall complete the Kemalist Revolution! We shall forge an independent, united, modern, popular and revolutionary Turkey!

I embrace my great People and vow to continue the fight against oppression!”