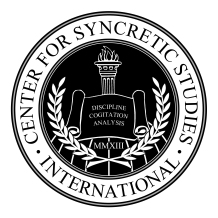 The Center for Syncretic Studies, an NGO, is a public geopolitical and ideological education institution which sees itself as part of the intellectual currents therein.  The center developed in response to the changing scientific, social, ideological and intellectual movements in North America, Europe and Eurasia which have the potential to reshape the discourse. The center was founded in 2013 in Belgrade, based on a 2010 white paper which we have adopted, as an international ideological education organisation, a discussion forum, review of significant works and news items, and conducts research for policy advocacy organizations, develops proposal recommendations, as well as a research facility for syncretic and inter-disciplinary social analysis.

We are committed to promoting an interdisciplinary approach which seeks to develop theory from unique combinations of ideas while also preserving space for and appreciating the utility of established orthodoxies. – 2013

Support our work on SubscribeStar Thank you!

2019 Addendum: Since our founding in 2013, our operating thesis that the “changing scientific, social, ideological, and intellectual  movements in North America, Europe and Eurasia have the potential to reshape the discourse”, has been demonstrated.

About CSS’ relation to ‘New Resistance’

In the Center’s work in the public interest, it advises a number of social movements, political parties, governmental and non governmental actors and individuals in those institutions, and post-political movements. Some of this advisement is conducted on a pro-bono basis, relying on general support from the public, other advisement is conducted within our fee structure, commensurate with the regulations of the jurisdiction(s) where we operate as a Non Governmental Organization, and a not-for-profit institution.

These above mentioned organizations and individuals may either a.) see themselves as part of, b.) wish to define themselves within, or c.) improve their appeal towards certain milieus and demographics which have a socio-political definition or meaning.

Based in our established and proven-effective epistemological framework of ‘deep engagement’, we develop the ‘New Resistance’ project as a phenomenological model – one possible model of many – that the above mentioned organizations and individuals can utilize for educational purposes; to understand one way of many that the work we are developing could be realized.

To be clear, there are new resistance movements which are not projects of the Center, and bear the same name and same or similar symbols. This is similar to how there may be various movements or organizations which use, for example, the term ‘communist’ and the ‘hammer and sickle’ symbol, but do not bear organizational cohesion, nor do they claim responsibility for each other’s works, statements, etc. Likewise, we do not present these other new resistance groups as a model, as our model,  nor are these our work, even if we have influenced these, or been influenced by their use of words and symbols at an initial stage to develop the New Resistance project as a virtual model.

How to understand New Resistance (NR)

Various think tanks and political consultancy firms have developed ‘blueprints’ of what a social movement might look like, and are often devoid of any necessarily specific or exclusionary content. The same art and science – technique – of building a political party or social movement can be applied to parties and movements with many different kinds of political or ideological foundations or platforms. These blueprints are similar to what an architect may draw up when working towards realizing a marketable project, that may be used by a private or public sector organization in need of a new building or complex.

The blueprint does not communicate surrounding landscaping, the color of the building, whether the windows will be mirror-style, etc.

Project ‘New Resistance’ by CSS takes things further, and has more utility in its data richness; in its communicated – inferred and implied – meaning, than a blueprint. What an architect’s scale model is to an architectural firm, (so that they can better communicate their vision to prospective government or private organization wanting to build a structure or complex,) is what NR is to CSS. CSS is the architectural firm, in this descriptive analogy, and NR the scale model.

Necessarily, the scale model must be fleshed out with features which simulate what the actual building or complex will look like. Likewise, NR is fleshed out with scale model features (specific historical figures, slogans, symbols, color-schemes, etc.) which prospective governmental or private organizations may not choose to use. However, what is accurately represented in the scale model which is NR, is an example of how various apparently contradictory and even mutually hostile narratives can be brought together and syncretized. Hence, it is the specific work of the Center – the product being a representation of our operating thesis.

‘New Resistance’ is a reified model developed by CSS; a project which represents one way our think-tank uses realizable tools of ‘Baudrillardian hyper-reality’ and other tools from structuralism and post-structuralism, semiotics and social construction, as a model.

For these reasons, New Resistance (NR) is a ‘virtual’ or ‘phantom’ entity, wherein the Center develops a working model and a simulacrum and corresponding spectacle; a unique interface  between content-creator (movement leaders) and content consumer/audience (the movement); and therefore covers areas of aesthetics, apparently political messaging, ‘public statements’ made predominantly in what are actually privately owned social-networking web-sites and apps, and is a virtual model of a post-postmodern (ppm), or structuralist/post-poststructuralist) social movement towards a post-post-truth social construction.

The dangers of a post-truth (post-modern) paradigm within a media culture which sees lies and lies by omission presented as ‘Truth’ as excusable, is evident to the Center. This is connected strongly with rising nihilism and social anxiety. But lies by omission in media, presented as capital ‘T’ truth, is possible only where the inter-subjectivity of social and political truth is denied.

This stage of societal (or global) development marked by increasing wealth and power disparity, in the context of a down-sized Atlanticist hegemony, will magnify as we encounter these in this stage marked by significant anxiety and public fears over the present and future of both individual and societal prospects. The New Resistance project shows that even even diametrically opposed, even radical, socio-political figures, references, and ideologies can be syncretized and harmonized.

Multi-polarity came to ultimately characterize the post-cold war era, and not the brief window immediately after the collapse of the USSR known as unipolarity or transatlantic hegemony. This means that specific multi-polar nodes representing broader civilizations will have the task of creating social cohesion in order to fulfill its right to self-determination.

Social cohesion within the emergent multipolar nodes, including the U.S, will require a legitimating ideology (monopolitik) or related spectrum of mutually inclusive legitimating ideologies (panpolitik), which transcend or negate the divisiveness and social turmoil associated with post-truth politics in this age of anxiety.

In this important aspect, the NR (New Resistance) project of CSS borrows from concepts present in modern and post-modern art, a more reified and realistically presented type of model previously seen in creator art/music collectives such as NSK (the Neue Slowenische Kunst). But contrary to NSK, the NR project is post-Dadaist or anti-Dadist in its core proposition: the relative nature of secular truths, and their context-driven temporality, is not meaningless and does not reduce their truthfulness or narrative honesty/integrity per se. It does not mean that these are ‘absurd’ anymore than a post-truth, or post-modern ontology produces anxiety, or as a release valve – a sense of absurdity and cynical alienation.

The NR project juxtaposes symbols, ideologists, memes, tropes, and texts from various socio-political movements, even radical ones, from modernity (19th and 20th century modernity, specifically). But this not done to highlight their inauthenticity in objective moral, philosophical, or historical categories, regardless of human travesties that may be associated with them – but rather to point towards the inter-subjectivity of these and those socio-political truths which underlay it as critical and universal components of the human experience en toto.

This underlying universal human experience is that in periods of economic crisis – periodic or chronic, whether of exogeneous or endogenous origin – populations come to an intersubjective agreement and arrive at a search for radical, time-sensitive solutions to the crisis, which are ‘populist’ by definition.

The Center is of the view that this crisis has the mode of capitalist production and accumulation at its core. Therefore, the model project ‘New Resistance’ utilizes modern tropes, memes (etc.) based in the last century’s experience with populisms, whether ‘left’ or ‘right’ (problematic categorical framings in their own right, to be sure), to create its scale model for crisis management proposals. ‘Right’ and ‘Left’ have largely exhausted their ideological, memetic, power. While they continue to redefine themselves, this requires an open dialogue and free discourse, which the Center has established itself as a part of.

What the New Resistance project of CSS shows is the utility of a transcendent political ideology, one which moves beyond the ‘othering’ politics of ‘Right’ and ‘Left’, and which are more long-term durable and credible than liberal pluralism and ‘relativism’ in the post-truth paradigm. Existing power structures dependent upon the present system in crisis, will seek to alleviate responsibility from themselves, and exert downward pressure onto various demographics, causing demographics to ‘other’ each other, towards a divisive politics where various forms of violence, including censorship, are employed. Whether blindly or cynically,

The Center and its projects, Fort Russ News, and New Resistance Evropa and New Resistance North America (not to be confused with the ‘Open Revolt!’ group by the same name), have faced relentless and unscrupulous attacks from institutions representing power. Our assessment is that there is a lack of appreciation of the nature and content of our work, and their attacks originate in the course of the bureaucratic logic and inertia of institutions which power structures have relied on, fears, or both.