European Solidarity Front for Kosovo:  A Heartfelt and Eye-opening Interview with Carlo Pezzolesi 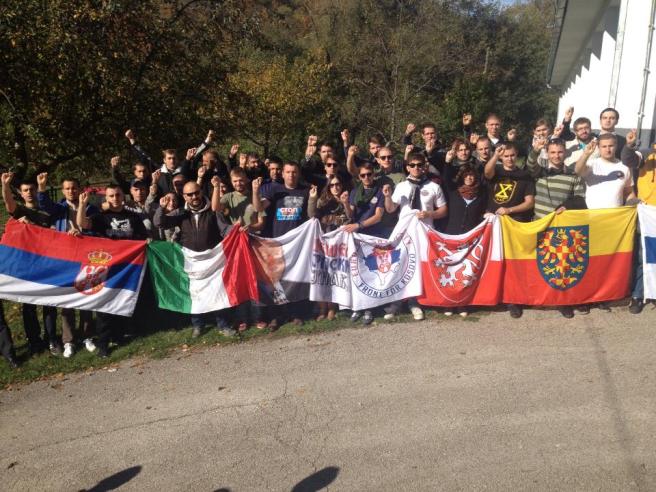 Carlo Pezzolesi:  The ESFK was founded in June 2013 following the example of previous successful establishment of the European Front for Solidarity with Syria in which the founders have created this new project and political solidarity to a question that we all had at heart and that is the sovereignty Serbia in the land of her most sacred region of Kosovo and Metohija.

The European Front for Kosovo and Metohija acts with the same methodology with which we have acted for Syria obviously with some differences to the different historical situation in which the two countries are having to deal with and then also the practicability and the way to tackle politically the two situations are different.  The European Front for Kosovo and Metohija is obviously having an exponential growth less than the militant movement of opinion that we created to defend Syria and its legitimized government led by President Bashar al Assad, but it has effectively more concrete potential than Syria because it is a story that has a long history and also is close personally and emotionally, involving many of us for different reasons which are deep.

For us Italians places such as Pristina and Belgrade are approximately only one hour by plane from Rome;  Italy has always easily had good relations with Serbia,  but for the shame of the allied (NATO – ed.) attack party from our bases,  our direct participation to the shameful destruction of the bombing towards your nation and the immediate recognition of Kosovo’s independence forces us almost necessarily have to be directly involved in giving our full support to the defense of territorial sovereignty, cultural and political life of Serbia in Kosovo.  This is one of the main reasons why we relate in a special way to Kosovo,  perhaps more than any other project,  we want to redeem the shame of the terrible decisions made by our compliant and subservient government and to demonstrate that there is another way of being Italian and European .

Teša Tešanović: What are your impressions of Serbia and Serbs in general?

Carlo Pezzolesi: I visited for the first time Serbia in October last year and immediately I was struck by the strong attachment that Serbs in general have with their nation and their identity. Not only in the capital of Belgrade but also in Metohija everyone expresses his love for the country and remaining attached to their roots.  However, this emphasizes the soul of a Serb warrior in contradistinction to that of Europe.  Together we want to show our governments that there is another way of being Italian and European than those of our servile  governments and that there are such men ready to fraternize with a young Serb like you, who has the same feelings of love for one’s own identity and their own nation as we have.

Teša Tešanović:  ESFK done a great job in delivering humanitarian aid to Serbs that live on Kosovo.  What is your view on situation in Kosovo?

Carlo Pezzolesi:  Being on your charming European soil in Kosovo has allowed all of us to rediscover the beauty of ESFK action, the happiness of being useful to someone, to smile and appreciate the small things and small gestures, such as helping Serb enclaves of Velicka Hocha and Gorazdevac.  The intent of the project of the European Front for Kosovo and Metohija is to be present to build and give voice and hope to those who suffer today this criminal New World Order that stole the soul of Serbia.  We believe in all this, every day more and more, in Kosovo as in Italy, we men and women of the descendants of those nations that once formed the peoples of Europe.

Teša Tešanović:  You where one of the speakers at the international ESFK conference organized by youth of Serbian Radical Party. What is your stance on that political party?

Carlo Pezzolesi: The guys of the Serbian Radical Party had accompanied us for the whole trip, and with them was born a great friendship.  We have the same understanding of the policy, in fact this has led to a tune that will take us over the next few trips in and in Kosovo Metohija.  Together, we have shown that the peoples of Europe are bound together against imperialism, in fact they agree with our views about the concepts of national sovereignty and identity.  Concepts that the Serbian Radical Party manifests itself every day in his homeland with his daily action.