What would our ancestors say or feel about us and our current situation? I mean really think about what I am going to write. And it doesn’t matter what race you are, but I sincerely hope my indigenous brothers and sisters seriously stop, think and soak in what I am about to say. Because the issue we have isn’t a new issue, its that we have been ignoring it, supporting the system and now we cannot exist within this system anymore without clashing with it.  But are we too late?

Capitalism has been our (indigenous people’s) enemy since the Europeans came over.  The colonizers needed more land and resources for their empires, so they always needed to expand.  Since there were already children of the land living and thriving, we were just in their way.  We were the ‘uncivilized’ to them.  Just because we didn’t see the world as they did, in a monetary way.  We saw things in ways of survival and preservation of culture.  We went through one of the biggest genocides in human history.  And we fought for our survival, and we fought until we couldn’t anymore.  When the colonizers were not as threatened by us anymore, they decided to assimilate us through cultural genocide.

They wanted us to live and view the world as they did.  It wasn’t good enough we were in open air prisons called reservations.  We had to speak how they wanted us to speak, we had to pray to whom they wanted us to pray to.  And we slowly adapted to their way.  We still proved ourselves to be warriors in their wars, and pillars in their society.  We lived quietly in the distance, talking about old ways and living honorably.  We have had several tense moments with the governments, but we continued to stand our ground and live within society at the same time.  But what we haven’t been doing is paying attention to this growing certain problem.  Along with this self inflicted assimilation, we also have to worry about losing our sovereignty over the land.

Capitalism will keep the ruling elite in power, and will attempt to get rid of any culture or people in the way of natural resources.  At this very moment, the planet is over populated, and resources are going to get scarce. The theory of capitalism can only thrive during an unlimited amount of resources, but we live on just one planet and we are running out.  So the ruling elite will become more aggressive on the last remaining resources on this planet. It is the only way the ruling elite will survive in power.  If they control the resources, they will control the people.  This is what we are seeing here.  Corporations wanting resources, hungry for more profits, looking for the last morsel.  They saw indigenous people sitting on sovereign water, minerals and land.  And corporations spread their ‘free hand of capitalism’ (more like tentacles) into the Canadian government to cancel treaties and make native land available for sale.  The loss of a way of life was not a concern to them.  Many natives still live off the land to this day in Canada.

Taking the land from them will be devastating. Again, forced assimilation, loss of sovereignty, loss of culture because the land and traditions are tied hand in hand, thus creating their culture.  Lack of acknowledgement of this cultural genocide.  Capitalism has finally caught up to us natives in the north.  Even when most of us were living in the most economically poorest areas in the country, we had become too comfortable with our way of life, we didn’t care to look over at our brother’s and sisters across the border.  Because if we did, we would’ve seen this coming.  Now we have a choice to make. We can be subservient, and let corporations control our way of life and sovereignty?  Or we can stand up, put some war paint on, and take back what is ours. 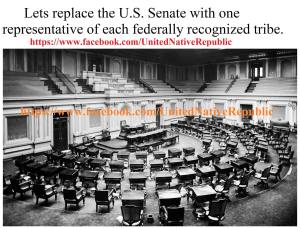 And I’m not talking about sending white people back to Europe.  That’s unrealistic.  There has to be a new way of life, separating ourselves from materialism and consumerism that capitalism brings.  We need to live more environmentally friendly and focus in green energy.  We should focus on what is better for our communities, rather what is good for individual gain.  We are the children of this continent.  We must protect it, or we will vanish with it.  We need to understand that the people need the power, not corporations.  Only through democracy can we bring corporate power down.  We will see that it will bring democratic socialism and corporate gain will turn into nationalized gain, gain for all, not for the few.  We need to stretch out hand out to our indigenous brothers and sisters, learn from their lessons and start demanding for what is ours.  We must not let this movement be driven by hate or revenge.

It should be driven by just love for our culture, and people as a whole.  With us focusing on the community, we can focus on presentation of our culture and way of life.  We can honor our ancestors by fighting for what is right and for future generations.  And we should get more involved and not turn into “coffee shop revolutionaries” (people that talk politics, but never get involved).  It’s easy, stand up, get involved, read, learn, listen, spread knowledge, and never belittle or demoralize others for differences.  By sitting there and doing nothing, you will be idle, subservient, and a tool. That’s not our way.

3 thoughts on “Idle No More”