Italian anti-globalization activists from  La Terra dei Padri bring together Nuova Resistenza – Italia and their own cadre for a presentation from CSS Director J. Flores

n May 6th, 2017 at la Terra dei Padri in Modena, Italy, Joaquin Flores gave a presentation on one of the most discussed – yet least understood – topics in contemporary politics, one that in so many reveals the importance of the nexus between the People and the geopolitical space in which the People dwells – Populism. The presentation focused on the differences between the varying types of populist ideologies and movements in East and West, grounding the discussion in a series of relevant examples of respective practical, contemporary manifestations.

Although, etymologically speaking, the term “Populism” dates back to Roman times, the subjects of the presentation were the modern and contemporary movements emanating from the popular uprisings that stemmed from 1848.

The idea, broken down to its bare essentials, is that – in spite of sharing the same, politically loaded term – Liberal and Communitarian Populism occupy opposite ends of the economic, cultural, and political arena.

On the one hand, the tenants of Liberal Populism – which Joaquin Flores also referred to as Civic Populism – are deeply embedded in the resolve to catalyse the various demands and apparently spontaneous protests of a range of heterogeneous post-modern pressure groups in the likes of LGBT, antifa, and so on. The result of such a scheme is that ‘the People’ – the natural and semantic object of ‘Populism’ – despite representing the vast majority of society, is the only group that does not find representation within the ranks of Liberal Populism. This, in turns, leads to the present-day paradox of having to invent a new category – ‘Popular’ Populism – to distinguish it from its Liberal counterpart. The strategy behind the nature of Liberal Populism is clear: to neutralize the demands of ‘the People’ by avoiding projecting a unified, clear, and single message. On the contrary, Liberal Populism thrives in bombarding public opinion and the vast majority of society with a plethora of sterile and exclusivist messages conveyed by the many minority groups thereby represented.

Moreover, Liberal Populism tends to say that “everyone is the People”, which is equivalent to saying that “no one is the People”. Accordingly, the inevitable clash between the agendas of different groups and factions within Liberal Populism translates into the production of notional ‘issues’ with no real solution, such as inter-sexuality and the ‘hierarchies of oppression’ narrative. This spectacle, fed to society by the mainstream media, is designed to make the People feel like they should stay at home rather than partake in such embarrassing forms of ‘political activism’. Therefore, it is clear how the objective of Liberal Populism – stemming from the British civic model – is to divide the People, to weaken it in order to facilitate its exploitation by the globalist financial elites.

On the opposite end of the Populist spectrum stands its Communitarian, ‘Eastern’ form in which the offensive of cultural Liberalism has not yet succeeded in light of a delayed contamination which started only in the late 1990’s – namely, after the collapse of the socialist order in the Eastern block – as opposed to the West, where it started as early as the 1960’s.

To better illustrate this dichotomy, the crowd in attendance was presented with the striking comparison between Russian national and English civic-liberal nationalism. Whereas the latter has not provided its People with any resemblance of a moral, cultural, ethical or religious background to define itself as a given people on its natural, geographical dwelling space – pointing instead at the observance and acceptance of the British legal and civic structure as a sufficient condition to define anyone holding a valid visa as ‘British’ – Russian nationalism is built on a shared set of traditional, historical and cultural values with which every Russian – whether nationalist, communist, or else – can identify. 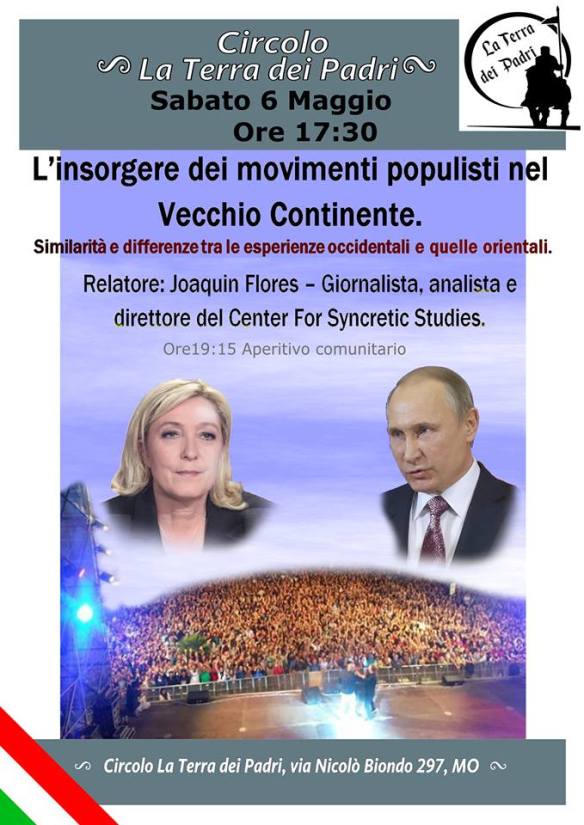 Is everything lost for the ‘People’ of the West, then?

Not yet. What emerged as the pivotal message conveyed by the guest speaker, was the consideration that not only are we blessed with the ‘privileged’ status of being equipped with the tools to understand and to catalyze the People’s concerns and needs in order to translate these into political ideology and praxis, but we also – in a paradoxical yet strategically convenient turn of events – need to ‘thank’ Liberal Populism – along with its proxies in academia and the media – for having alienated the People to such extent as the one we are experiencing today, and for having created the very same vacuum where we are given the opportunity to move towards the People and meet its demands.